On 19th November I stood in the Latest Music Bar Brighton and read out bits of my teenage diary from the year 1984-1985.   The event, ‘Cringe at Mass Observation‘ was jointly organised by Cringe and Mass Observation as part of ‘Being Human: The Festival of Humanities’.  London Cringe organise events where “Funny ‘grown-ups’ read aloud from their teenage diaries”.  It’s a model that was picked up from New York and spread from there.  Fiona Courage and Jessica Scantlebury from Mass Observation had been to one of the events and had immediately recognised Cringe’s resonance with Mass Observation writers who also share their private experiences and analysis for public consumption.

You can hear a bit more about Cringe, where it came from and the Brighton event on a podcast of an interview myself and Cringe organiser Ana McGloughlin did for Radio Reverb with Melita Dennett. (at about 22 minutes in)

The Brighton event brought together two seasoned readers from London Cringe with a number of first time readers connected to mass observation.  Our diary extracts were interspersed with diaries from the mass observation archive and Project. Alongside my own brother-in-law, Jim Proudfoot, who I ‘encouraged’ to read from his teenage diaries, Jane Harvell, Pam Thurshwell from Sussex Uni also read. Pam and myself had been invited to also use our other academic heads to put diaries as writing and sources diary in a bit of context.

I began by using the MOP Christmas Day Diaries from 1986 digitised by Observing the Eighties.  I won’t go into great detail analysing their content and their significance, largely because they have already been brilliantly dealt with elsewhere by Owen Emmerson. I used them to set out the sorts of things historians can and do ask about diaries and then think about what happens when I look at my own diaries

“This directive was the first to be sent out after a gap of over a year when the MOP ran out of funds and no directives were posted out. Part 1 is therefore a request for a self portrait either updated from those people who’d been on the mailing list in Spring 1985 or a new one from people recently recruited for the re-launch. Part 2 requests an account of the most significant events of 1986, both personal and in the wider context. Part 3 is a request for a day diary for 25 December (whether you celebrate Christmas or not).”  Dorothy Sheridan

The responses brought together all the different elements of diary writing – recording events and experiences, second hand reporting of other’s conversations and experiences, analysis of public events, offloading and  confession, reflecting on the past and imagining the future.  The respondents provide incredible insight into the sort of thing we can’t easily access; food habits, television watching, family schedules.  The simplest details can all say something more complex; about gender roles, cultural capital, self expression through consumption, financial priorities, emotional and domestic labour, values and class. Who cooks the turkey the night before? whose hands are full?  where is food the bought from, Marks and Spencers, or reared by a friend who owns a farm? These questions tell us something important about consumption, social networks and status.

The Christmas diaries move forwards and backwards in time.  Respondents reflect on their own childhood Christmass, the loss of family members, and their hopes for the future.

A883 used his response to confess his annoyance, and criticism of his children.  In the rest of the response, he documented his day carefully, noting his turkey is from M&S chilled and he smokes Gitane cigarettes. There’s a relish in his writing which is framed as a letter. 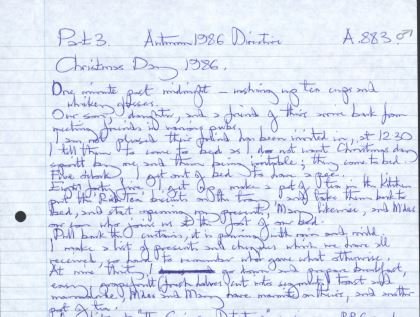 W632’s Christmas diary reads like an Alan Bennett play.  She wrote about missing her own parents, and catering for her parents-in-law whilst her husband is at the pub.  She chronicled the realities of lonely old age, looking after an elderly neighbour.  Although she restrained herself from explicitly criticising her sons’ irresponsible drinking habits, I can’t help thinking that it was “a nice quiet Christmas” largely because one of her sons was too pissed to come round and the other one forgot to.

I like these two excerpts because they are good examples of the different forms and shape diary writing can take.  But what I love most is the confessional venting of anger. Probably because I used my diary to slag people off all the time.  Even more satisfyingly these are the adult parents responding to their teenage and adult children’s behaviour.  (My appreciation of this might not be unrelated to the fact that I have my own teenage daughter).  I have much more in common with the MOP writers now than I do with the versions of myself I found in my own diary.

My diary began in Hawaii where my father was working on sabbatical.  We had joined him on holiday for Christmas and I had been given the diary by my mother.  I continue writing in the diary more or less regularly over most of year until basically I got a boyfriend. (Who I appear to have been cheating on but have not memory of.)

I’m going to go straight to the confessional.  My diary is filled with discussions about which boys I fancy, but all the emotional investment and intensity is in the female relationships.  Looking back at my diary I can see the girls doing an awful lot of the emotional labour in our mixed gender friendship group– which the boys were probably completely oblivious to.  All the way through the boys are only really useful as a currency to talk about with female friends.

A large section of the diary’s narrative structure builds up to and then deals with the fall out from a two week French exchange.  The trip itself is a gap in the diary – it’s a set of blank pages that Virginia Woolf would be proud of. I think its probably best to maintain the silence over the French exchange in this blog too.

As a historian I love silences, and aftermaths, but when preparing a slide show for the talk I realised that the French exchange was also pretty much the only time that anyone had any photos of me.

So when Ana began her introduction to the event with a picture of herself on a ferry it made me wonder how many teenage photos are taken on ferries? It also reiterated what had already been a dominant theme when I’d been thinking about the MOP and my diaries; the tension between universality and individuality.  Particularly I was struck by the lack of any coherent voice, or sense of self within my own diary, whilst at the same time there were startling similarities across the diaries as a whole.

The diaries we shared that night were doing a lot of complex identity work, so it isn’t surprising that their narrative voices are so messy.  I wasn’t alone. Jane Harvell did a lot of telling herself off in her diary.   In the rest of this post I want to think about how the messiness of an individual diary is further complicated when read alongside other diaries in front of an audience.

My diary is filled with a self-consciousness about my writing (including my handwriting).  Throughout the diary I undermine my own narrative, second guessing what I really mean, telling myself off, or disagreeing with myself.   There is a conscious working through of the impossibility of an authentic feeling narrative.  Looking back at them whilst at the same time currently researching for a chapter on children and youth television I wonder whether this was partly because at the time there were so many books and tv programmes based on teenage diaries.  If the teenage diary became a dominant media template then perhaps it form felt wholly performative as a form.   What do we do about being a cliché ?

January 3, Honolulu,  Lit Crit – but don’t actually get the song right – story of my life. 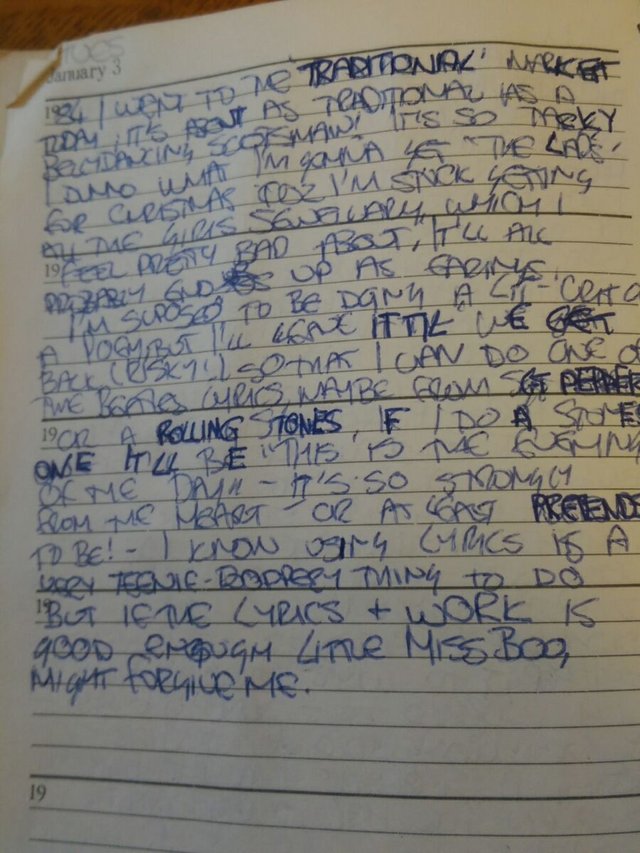 I think the relationship between letter-writing and diary writing is interesting, diary entries about letter writing, and value judgements of the relative merits of each. 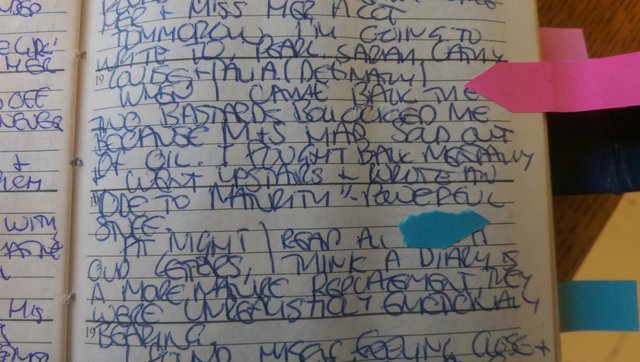 Because I found myself reading my diary in public, it raised the question of who I thought I was writing for at the time.  In some entries I seem to be explaining stuff to myself that I really should have known about myself, at others I’m simultaneously imagining a future me and creating a self in the present.

Feb 21 explaining to myself which Nick I had decided to be in love with. (I have no memory of either Nick I’m afraid) 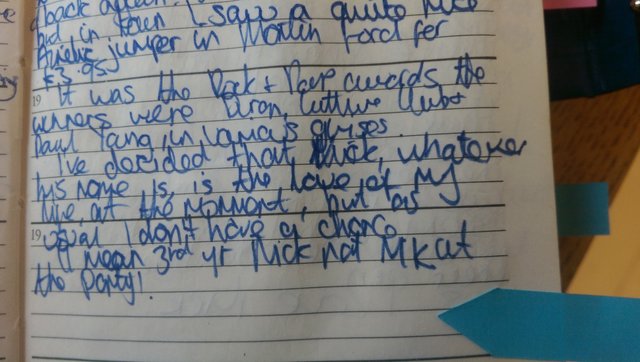 May 13 The Key to the narrative 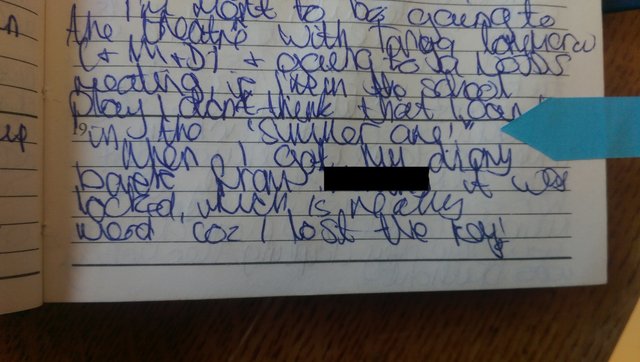 Perhaps my sense of diary writing as performance was more literal than I thought at first reading.

Historians have done lots of interesting thinking about how to read diaries. Particularly those trying to find traces of women’s experiences, networks and agency have long recognised the  diary as a way into the private realm.  Diaries helped uncover the development of middle class ideas of domesticity in the nineteenth century, for example. The growth of work reproducing and analysing women’s diaries in the 1980s marked the growth of personal, women’s and bottom up histories; the methodological claim that the personal is political.   We might want to be careful about the way in which we equate femininity with the domestic, and the class biases that this might lead to.  We might want to be careful when equating the performed personal nature of the diary with an assumed lack of public agency.   As Rebecca Steinitz pointed out in the 1990s we got to a point where ‘the idea that female diaries are important has somehow involved into an assumption that diaries are female’. But that doesn’t mean that we can’t still take diaries seriously as a way into interior lives, and as a way to uncover absences in the public records.  So as historians we have thought about writing diaries, but what Cringe raised for me were the pleasures of reading them.  When we read and listen to diaries being read out loud, it helps us shake of the simplified binaries of public/private, masculine/feminist,  voice/silence

In her article ‘Desperately Seeking Sameness‘ Lena Karlsson unpicks the motivations and emotional connections behind blog reading.  It struck me that this might be a useful starting point to think about what it means to read, rather than write, diaries.  And it might help me out of worrying about being a cliche (then and now).  In turn tracking blogging backwards into diary reading might help us avoid the trap of seeing web 2.0 as a magical trump card that over-rides all nuance in historical debates around continuity and change.  So what happens if we take her responses to digital sources, and read them backwards into the analogue form of the diary?   Karlsson argues that looking for ‘likeness’ is a driving force behind blog reading.  Blogs fulfill the ‘lure of identification’ which is sharpened by the immediacy of their production and publication, and the proximity between time of writing and time of reading.

At Brighton Cringe there was an added, largely generational, identification.  Readers and audience shared a recognition of the cliched/universal experiences in the diaries, but they also shared in the passing of time since. Despite the individual identity work and complex management of imagined selves in diary writing, when we read our diaries out loud the collective recognition of shared experience created the most joy in the room.

2 thoughts on “Cringe, in more ways than one, (but don’t tell my Mum)”