On a Thursday night in August 2015 I sat at home remotely supervising 4 of my post-graduate supervisees who were sitting in a pub in Brighton.  I tweeted a series of discussion points.  They set the agenda.

In my last post, Part 1: Remote Control Supervision, I introduced the ideas behind the experiment.

I’ve chosen to play with thinglink for the images in this blog post because that seemed like an appropriate way to represent the connections between the different forms of thinking,  experiences and places in the experiment, without losing sight of their different contexts.

The first two tasks of the first session were designed to set up a sense of community among the group and include them in the evaluation of the project. There were then two subsets to the experiment; the first was to map the ripples of their own research by finding ways to trace a series of layers of explanation about their projects.  The second subset was to reflect on the experiment itself. The first section was about audiences and being familiar with our project. The second was about supervision and collaboration

The ice breaker – (whose claim to fame in the group would I be most impressed by?), was designed to allow them to take the piss out of me if needed, and also to demonstrate that although they didn’t necessarily know each other very well, they all knew me and had a lot in common.

The whole discussion was kindly storified by Owen

A recent post on the Modern British Studies blog by Keiran Connell reflected on what collaboration might mean in the current climate.  Connell wrote about co-writing an article with Prof Matthew Hilton about the history of a collaborative research institution the CCCS at Birmingham.  Together the article and the blog post dispel the myths that somewhere, before Thatcher, and long before the REF, there was a utopia of interdisciplinary collective, engaged academic research.  Connell and Hilton dispel the myths of the past.  I want to dispel the myths of the present – that the structures imposed upon us, to demonstrate our individual value for money, have left us incapable of collaboration apart for in the most self-serving terms. The myth is that the system has in effect beaten us.

Owen’s reflections on the experiment set up the complex ways in which the individual research projects can feed into a collective identity.  It also got at something suggesting how supervisors supervise by not being there.

“I lost count of how many ideas and recommendations were shared, and how many times the phrase ‘that’s what I’m finding’ was spoken. This process really seemed to break down the barriers of our own research parameters, and really highlighted how closely related our research questions were. We all are looking beyond conceptions of evolutionary social change, challenging overarching narratives, and delving into the ‘messiness’ of everyday subjectivities. Our supervisor’s role in our research, the impact their research had on our own thought, and how our research grew from this relationship was another common thread that bound our thoughts together.” – Owen

Task 1) Explain your project to everyone in the group – however and in whatever ways you want.  (I realised at this point that I didn’t actually know whether they were reading my tweets unless they liked them.  I also realised that I felt a bit left out)

Next I asked rounds of questions designed to follow the ripples of interaction and intervention that can move outwards from a thesis or individual research project. These questions were either taken directly from or inspired by those used in Josie Dixon’s workshop ‘Phd: Facing in or out?’.

Task 2) How do you describe your project to a random elderly relative at a family wedding ? 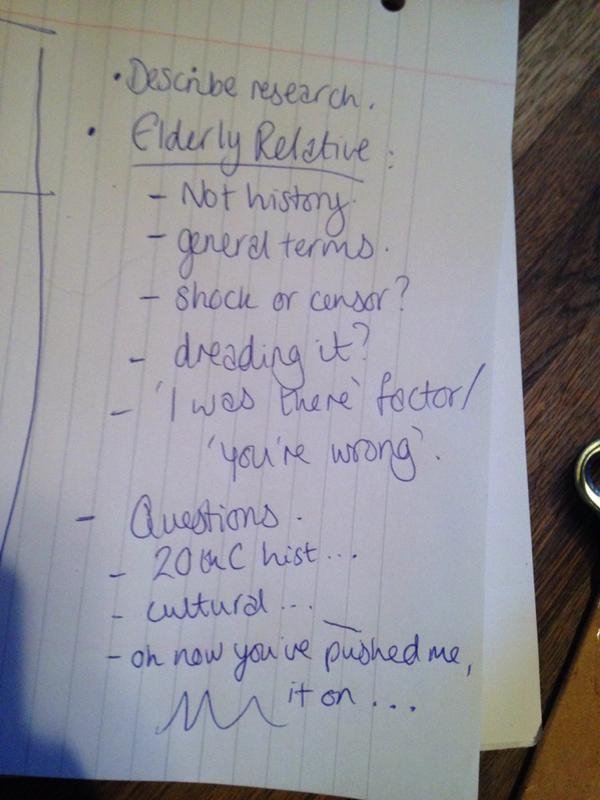 Task 3) list the interventions your research makes in terms of i) Periodisation ii)  Methods iii) gaps, myths, what happened. 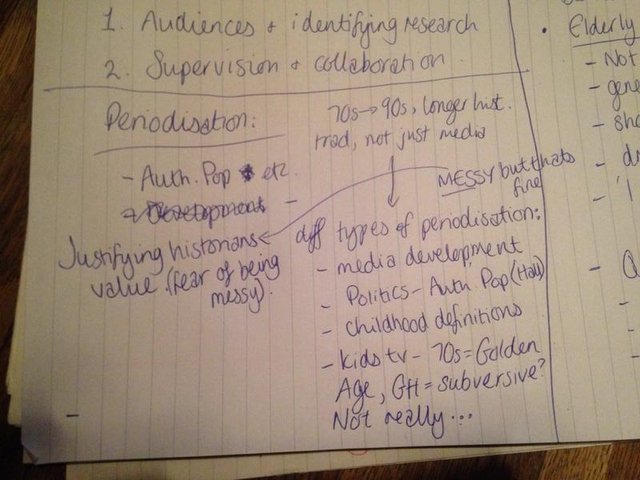 I checked that everyone really understood each other’s project – as this was going to be the building blocks of the next stage of the experiment.

Task 4) Who reads your work now? Who will read it by the end? 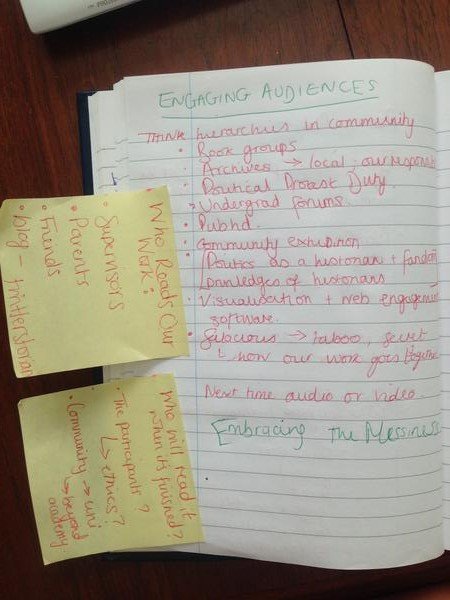 What really struck me here is the ways in which the guinea pigs were able to wield the agendas from the outward pressures, but maintain their own agenda, integrity and commitments.  Sitting around a table in the pub, with mobile phones and a few postit notes they were able to ask some really big questions.

Laura wrote: Personally I’ve spoken to sexual health services in Brighton who sounded interested in what I might find. Amy is interested in what schools might find relevant from her work, and the pupils themselves – especially school uniform reform groups. Led to convos about use of our work in assisting political protest, our responsibility or duties as historians to local groups and associations including sustaining archives and groups. Owen mentioned at the Ripper Museum protest yesterday, protesters were happy there were historians there to be the vocalists and give a sense of authority to their concerns. Even though usually we talk about the privileges of historians and hierarchies in the community as problematic.

All of the group’s responses underlined this as a group of researchers, forming a collective identity in process. They were all determined to set their own agenda within and against the outside pressures of the targets, structures and quotas.

“I don’t think my research has ever felt more relevant than it does now, writing this. Being encouraged to articulate my ‘point’, my ‘so what?’, in differing ways, really made me see that the politics that I am currently enveloped in are a fundamental part of my research. Thinking about what our research was for, who would read it, and thinking ‘what differences does it make?’ really chimed with my experience as a protester and historian at the demonstration against the proposed Ripper Museum in London the day before. It has made me think hard about my responsibilities in using life history, and think about how those I write about are going to read and feel about what I have to say.” 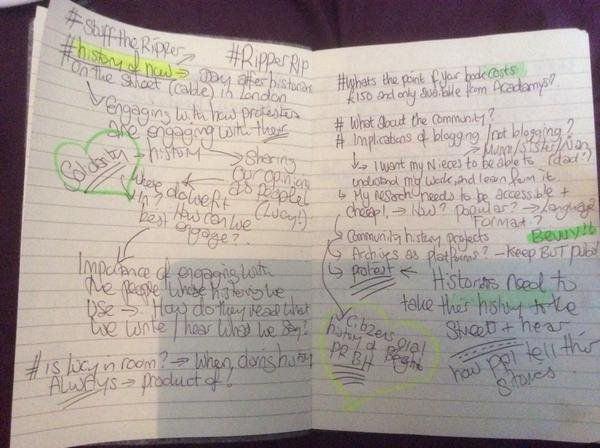 Here the real outside pressures struck home to me and also demonstrated that this experiment was  successful when it moved beyond the parameters that I had artificially set.  That was after all the point.  The real world is not just deadlines and funding criteria; it is politics.  Owen and I had been in the small group of Sussex historians who had joined the protest against the Ripper Museum in the East End the day before.  Since that point he had been involved in supporting the campaign for a history of working class East End women

So by this point everyone had thought about their work fits into a number of different conversations and had already set an agenda beyond a standard ‘how to get a job’ narrative.

“Being in a pub outside of university, and outside of the formalities of our labour, was really useful in helping us to think about where we need to be sharing our research. We can only truly hear how people are telling their stories when we are prepared to listen on their terms, in the way they want to tell it. I had anticipated that I’d be productive today, but like I said before, not in the way I have been. I’d imagined it would have given me the fuel to re-edit something, spend the day in that book I’m putting off, or planning ahead. Instead I’ve been engaged in the community project to establish a East End Women’s Museum, listening to people’s amazing stories, and finding where I can help. I know I’ll do all those bits I’ve got on the list, but this seems more important for my research right now.” Owen

By this stage I was actually a bit concerned that I’d taken up an awful lot of their time.  They had been in the pub for an hour and a half by this point.  I started to rush them a bit and they had to very gently slow me down – we had already established a ‘safe word’ in case they just wanted to chat and didn’t need my interventions any more #TaylorSaysStop

Task 2) Stop – reflexivity time.  Am I in the room? Why is it better to DIT (Do It Together)? How might this work better? What is gained? 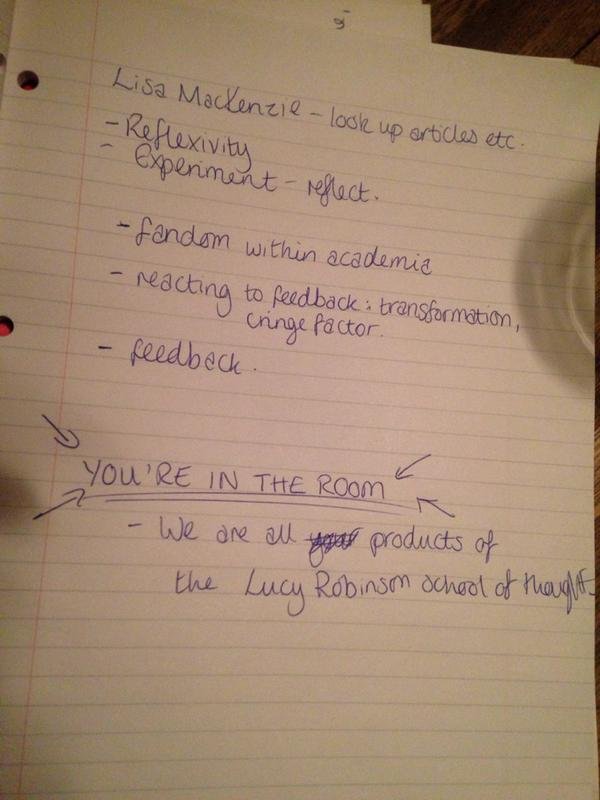 Laura wrote: Is Lucy in the room?? Yes! Because like we said in the … article [that she and I are writing together], we have been taught by you and so even without your physical presence, our conversations about our work is always collaborative and products of the people we have been taught by to some degree”.

So what next? By way of conclusion I asked Laura to put down her thoughts after the experiment.

Maybe we should have audio or video recorded convos because multi-tasking between listening and writing notes is not always effective.

I know exactly what she means! – and it might well be my fault after all.

So I set out to test out some useful techniques I’d picked up at Josie’s training session with an eye on encouraging my PG supervisees to keep their eye on the ‘big questions’.  They took that and ran with it all the way down Cable St.  Here suddenly the digital form and content of hybrid digital pedagogy took on new political implications.  They forged a way through the inward and outward pressures of the ‘ivory tower and the shopping mall’. They playfully slipped between what happened in and outside the room, face to face and virtually. Got to hand it to my supervisees they know how to embrace the messiness!

Not either/or: inward and outward, ivory tower and shopping mall, masters and doctoral researchers, teaching and research, virtual and face to face, academic and public, personal and political, postits and twitter.

The five of us would like to collaborate on an article growing out of this project – so any feedback or suggestions would be great, thanks.

1 thought on “Part 2: Remote Control Supervision – the messiness of hybridity”